Do you accept our use of cookies for web analytics?

“The annuity gives me financial security”

Fredrika’s back problems forced her to change jobs, which made her income drop. Since Fredrika felt her back problems was caused by her work as a nurse, she applied for annuity from Försäkringskassan.

“The annuity has given me financial security. Since I got sick in 2013, my personal finances have been a constant concern. First, I had a lower income when I was receiving sickness benefit. When I was finally able to find a job I could handle despite my back problems, the pay was much lower than at my previous job,” explains Fredrika.

Applied too early a number of times

If you suffer an occupational injury, you can receive annuity if there is a doctor’s certificate or other medical documentation indicating that the injury will affect your ability to work for at least a year going forward from the date the doctor wrote the certificate or documentation.

Fredrika did not understand the rules for receiving annuity at first. As a result, she applied several times before finally being granted annuity.

“I thought my employer had applied for compensation for me when they sent in the occupational injury report. I then found out that I had to send in an application myself. But, when I sent in my application, it was rejected. That’s because at that time it was not possible to determine whether I would be able to continue working as a nurse or would have to change to another job where I could earn as much.”

“It was not until my application was rejected that I understood how the rules work, and I needed to wait until I knew more about how my back problems would affect my ability to work and earn money.” 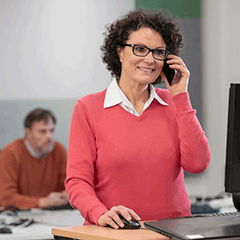 “For quite some time, I did not know whether I would be able to continue working as a nurse or if I would have to be repositioned at my employer and keep the same salary.”

Medical and occupational rehabilitation are often required before it is possible to assess how an injury will affect a person’s ability to work and earn money in the long term.

A medical certificate from Fredrika’s doctor in May 2016 indicated what rehabilitation Fredrika had received and that should would not be able to handle heavy lifting in the future, despite the planned continued rehabilitation.

“Unfortunately, there were no jobs at my employer where I could keep my salary, but avoid heavy lifting. There was also no other job I could apply for that suited my education and would give me as high of a salary as I had as a nurse. In the end, I began working as an administrative assistant. So, I sent in a new application for annuity in August 2016.”

Försäkringskassan determined that Fredrika would lose at least one-fifteenth of what she was earning before the injury for at least one year going forward, counting from May 2016. Her back problems were approved as an occupational injury and she was granted annuity from May 2016 to cover the difference between her previous salary as a nurse and her new salary as an administrative assistant.

“The whole process was unnecessarily long and drawn out with all the rejections. I thought annuity was compensation for the actual injury and that I was entitled to it immediately. I was completely wrong. Now I understand that annuity is an insurance that covers the income I will lose in the future due to my occupational injury.” 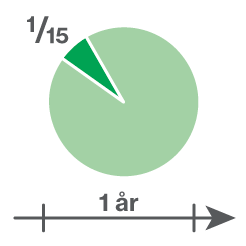 You can receive annuity if your salary will decrease by at least one-fifteenth or more for at least one year due to your occupational injury.